Rachel pushed the frozen turkey down into the water-filled sink.

Some of it sloshed over the top onto her socks. She’d been up five times last night, and not once had she thought of thawing the turkey.

There’s no way her mom would have forgotten to buy the turkey until the night before Thanksgiving.

This morning she hadn’t even heard Patrick leave, but there must have been an emergency at the electrical plant for them to call him in on a holiday. She turned on the oven.

Pulling out the potatoes from the closet, she picked off as many of the eyes as she could and opened drawer after drawer, trying to find her vegetable peeler.

Cassidy stomped into the kitchen, her blanket squeezed between her crossed arms. “Bryce told me I was too little to play cars with him. He said I always mess everything up.”

Rachel wrapped Cassidy in a hug, but the girl stood firm as a tree trunk. “Maybe you can help me find my vegetable peeler.”

“You’re just going to let him be mean to me?”

Rachel took a deep breath and let Cassidy lead her to the bedroom. Bryce was on his stomach, piecing together a race track. “Have you seen my vegetable peeler?”

Bryce bit his lip. “Um, me and Kirk were digging trenches for the ants yesterday and one of us kind of snapped it.”

Cassidy put a hand on her hip. “Mommy, you’re supposed to be giving him a spanking.”

Rachel bent down, but couldn’t think of what to say. She heard squeaks coming from the other room, followed by Grace’s wailing from her bassinet. Rachel leaned her head against the doorframe.

Even in her first three weeks of life, Grace seemed so much needier than the other two had been . . . unless she had blocked those first newborn weeks out of her mind.

If she waited much longer, Grace would have an even harder time latching on. She winced as she stood and scooped Grace into her arms.

Sinking down into the recliner, she heard something whack the wall, followed by a “Go away!”

At least Grace was content, and Rachel wasn’t as sore as she’d been yesterday.

A charred scent filled the air. Not wanting to disturb Grace, she tried to use her free hand to stand. Grace whipped her head to the side and crunched her face as if Rachel had pinched her. Sighing, Rachel set her down and bolted over to the oven.

She pulled out the cookie sheet of three leftover chicken nuggets, which now resembled charcoals. Dumping them outside, she opened some windows and tried to coax Grace from her anguished state into nursing again.

Cassidy and Bryce’s voices crescendoed from the other room, so she threw together peanut butter and jelly sandwiches and set up a show for them.

The turkey still felt like an iceberg in the sink.

How had her mom done it with three kids of her own? Dad hadn’t let them get a TV until they were teenagers. Rachel had always been annoyed when her mom made her work in the kitchen all morning, especially since her brothers only had to help Dad put up the Christmas lights.

Christmas lights. She hadn’t bought any new ones in three years, since there had been a short in part of one string.

She grabbed a glass dish. She could at least put together her green bean casserole while she was waiting for the turkey and avoiding the fact that she’d have to peel the potatoes with a knife. Pushing aside cans, she finally sat back on the floor as she realized she’d used her last can of mushroom soup two nights ago.

When she closed her eyes, her hunger came on her like a bear, so that she hardly knew what she was doing until the bag of Cheetos was empty. She’d never seen her mom nibble on anything while they were cooking the big meal.

Crumpling the bag into her fists, she tossed it onto the floor. If only she could call her mom now. She’d know how to whip it all together.

Rachel wiped her eyes. Giving birth to Grace had made her even more emotional than she thought was possible. Lots of people lost their moms, and many more of her friends would in the next fifteen years.

But no one else knew what it was like to lose her mom. She just wanted the meal to be like she’d had growing up, since it was the first Thanksgiving without her. Why had she invited her mom’s best friend instead? So that she’d have someone else to witness her failure?

The doorbell rang, and she dived for the Cheetos bag, stuffing it into the bottom of the trashcan. When she passed the wall clock, she thought for sure it was broken. It couldn’t possibly be 3pm. That meant that if she put the turkey in now, they might be able to eat by eight. The thought made her throat constrict, but she swallowed hard before opening the door. Marilyn stood outside, clutching a tin-foil covered pie pan and wearing her plastic rain bonnet, which she tied on even if it wasn’t calling for rain.

She stepped around Rachel and across the living room into the kitchen. Rachel saw her survey the surroundings as if it were a crime scene.

“I thought I’d come over a little early to help get things ready.”

Rachel shuffled toward her. “My vegetable peeler is—“

“Of no concern. It just so happens I put a few things in my freezer when I thought my niece and nephew were coming. I’ll be back in twenty minutes.” She steered Rachel out of the kitchen.

Cassidy came bursting into the living room. “It’s my turn to pick a show. Bryce always picks boring ones.”

Marilyn bent down. “I’m going to need your help soon. Can you start setting the table while I’m gone?”

Cassidy’s eyebrows lifted. “How did you know that’s my job?”

Grace started to whimper, so Rachel picked her up.

Marilyn turned to Rachel and nodded toward the kitchen. “Remember, not one foot in there unless Cassidy can’t reach something.”

By the time Rachel had finished nursing Grace, Marilyn was carrying in grocery bags. She took Grace from Rachel’s arms and set her in the baby swing. “What perfect timing. Now you’ll be free to lay down until supper is ready.”

Rachel grabbed a bag and started setting dishes on the counter. “What are you talking about? I can’t let you do it all yourself.”

Marilyn’s eyes wrinkled. “Who do you think helped your mother out when you were Cassidy’s age? And I can assure you a Norman Rockwell turkey was not on the menu.”

Rachel woke to a soft knock on the door. She’d only planned to lay down for a few minutes before helping Marilyn. When she opened the bedroom door, the smell of turkey made her mouth water.

Patrick took her arm and pulled out her chair. She sat down, feeling like she was in a dream. There was even a small candle lit on either side of the platter of turkey loaf. Her eyes scanned the paper table cloth where Cassidy and Bryce had drawn pictures of turkeys and pilgrims.

A can of cranberry sauce. Greenbean casserole. A small dish of mashed potatoes in a foil pan.

Marilyn handed her a paper napkin. “They make it pretty easy these days.”

“You said when you helped my mom, you didn’t have turkey. But I wanted to make it just like I remembered.”

Marilyn laughed. “You think she did a whole turkey dinner with three little kids running around? She didn’t start the real fixings until you were old enough to help.”

After a few minutes, Bryce pressed his lips together. “Can we have pie now, or do we have to wait?” Marilyn took off the foil. “I think I have a little extra room in my hollow leg.”

Cassidy peeked under the table, gently poking Marilyn’s knee until Marilyn put a slice of pie in front of her.

Rachel let Marilyn dish her up a piece, too. When she took a bite, she almost choked. She’d thought it was pumpkin. Tears burned her eyes. “It’s just like hers.”

“Your mom always made the perfect squash pie. I was a little worried I wouldn’t be able to follow her recipe exactly.”

Rachel let the last bit of crust rest on her tongue before chewing. “I don’t know what I would have done if you hadn’t come. You fixed everything.”

Marilyn placed her wrinkly hand over Rachel’s. “Can’t you see that nothing was ever broken?  Your mama would have loved sitting at this table. I see so much of her in you. But sometimes you both needed to just see the elegance in a microwaved dinner. “

Rachel stood to help clear the dishes, but Patrick tugged her over to the couch. “I’ll take care of it. I think the kids need to hear a little more about all the work you had to do when you were helping your mom with Thanksgiving dinner.”

Cassidy bounded over to the couch. “Can I hold baby Grace?”

Rachel tucked pillows around her and placed Grace in her arms. Bryce snuggled into her side while she rubbed his back. “Hey Mom, do you think we can have this food again sometime? I could help you even.”

Rachel laid her head on top of his. “I’d like that.” 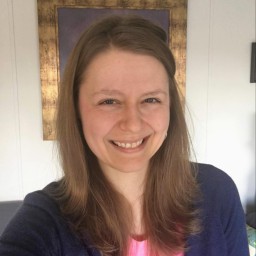